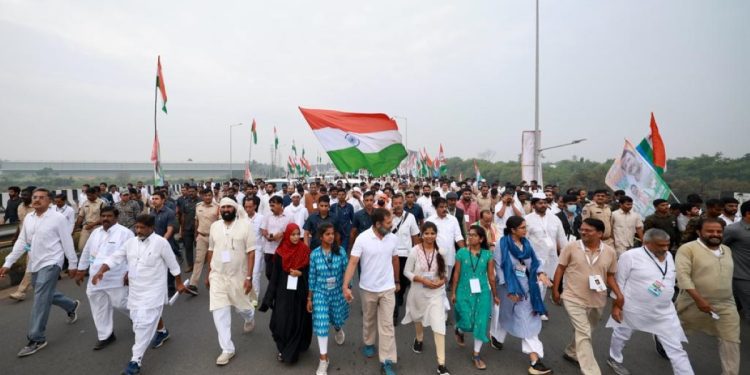 Congress leader Rahul Gandhi continued to attack the BJP and TRS on the sidelines of his Kanniyakumari to Kashmir Bharat Jodo Yatra on Thursday, 3 November.

He came down heavily on Telangana Chief Minister K Chandrasekhar Rao, saying a lack of amenities had led to the recent incidents of food poisoning in government residential welfare school.

The Congress leader, who represents Kerala’s Wayanad constituency in the Lok Sabha, was addressing a public rally at Sivampet in Sangareddy district.

In September, as many as 33 girl students fell ill afta dead lizard was found in the food served at the government-run Girijan Ashram Girls High School hostel in Telangana’s Warangal district.

Targeting the BJP at the centre, he alleged that Narendra Modi-led government had “intentionally created unemployment”.

The Congress leader, who represents Kerala’s Wayanad constituency in the Lok Sabha, was addressing a public rally at Sivampet in Sangareddy district.

On its ninth day in Telangana — the fifth and last southern state — he would lead the yatra in the Sangareddy district.

The Telangana leg of the march would end on Monday, 7 November, in the Kamareddy district.

India’s PSUs are not PM’s personal property. We won’t let him sell them to his wealthy friends. pic.twitter.com/B6gO74Sy4N

Continuing his tirade against the TRS, Gandhi alleged that the KCR-led Telangana government was on a path to privatise the education system.

“Chief Minister KCR is not bothered about providing quality education and healthcare to the people of Telangana as he is only bothered about increasing his assets. He browses the Dharani portal (official portal for registration of agricultural and non-agricultural public property in the state of Telangana) every day to know how much land he has looted from the Adivasis (tribal) and the poor”, Gandhi alleged.

Gandhi said that engineering students were not getting jobs in Telangana even after studying for several years. “They are working as labourers and cab drivers”, the Congress leader said.

Targeting the prime minister, he said that “Modi wants to privatise BHEL and BDL. BHEL has thousands of acres of valuable land across the country. These lands will be given to his (Modi’s) rich friends”.

“There were granite industries in Karimnagar and Khammam (districts) earlier. Four to five lakh workers used to be employed. People used to come from other states like Uttar Pradesh and Bihar. Both the state and central governments did not support the victims (employees who had lost their jobs”, Gandhi alleged.

Training his guns on the Modi-led BJP government, Gandhi said, “The BJP intentionally created unemployment to spread fear and insecurity among the people. Demonetisation and GST left lakhs of people unemployed”, the former AICC president added.

Alleging that contracts in India and Telangana were being awarded to two to three rich people, Gandhi added, “Jeans enterprises in Ballari (Karnataka) are examples of demonetisation and GST effect. More than 4.5 lakh have lost employment in Ballari. Modi will destroy small and medium enterprises. He is distrcreating such destruction to support his friends and the friends of KCR”.

Incidentally, his mother Sonia Gandhi had made her electoral debut from Amethi and Ballari in 1999. She defeated BJP’s Sushma Swaraj in Ballari.

Gandhi noted that both TRS and BJP were on the same page in killing democracy and extending the benefits to only a few rich people.

“The BJP and RSS are spreading violence, hatred, and fear among the people,” he said.

He further said that whenever any opposition party opposes the BJP bills in parliament, TRS immediately extended its support to the ruling dispensation.

“Modi presses a button to pass bills, and KCR reacts like a bulb”, Gandhi alleged.

The Bharat Jodo Yatra entered the Sangareddy district of Telangana on Thursday.

It would take a break on Friday, before reaching Nanded in Maharashtra on Monday night, 7 November.