These are the first arrests in connection with the attacks in the state that started with a crackdown on PFI leaders on Thursday. 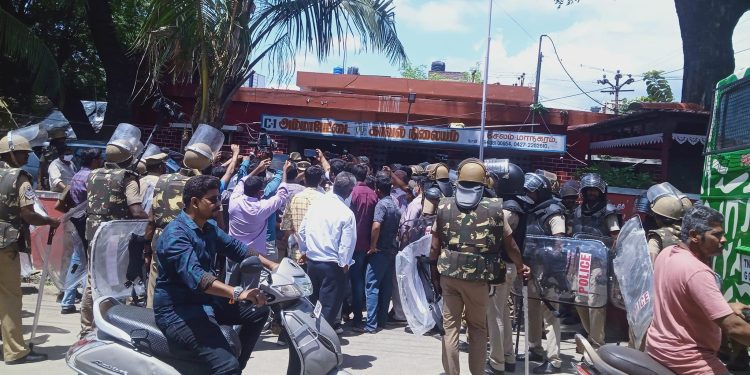 Condemning the arrest of two SDPI members, the public gathered before the Ammapettai police station in Salem. (Supplied)

After days of continuous attacks — including with Molotov cocktails — against BJP and RSS functionaries and their houses, properties, establishments and vehicles, in Tamil Nadu, the police arrested five individuals on 25 September.

The police identified them as Sikkanther from the Dindigul district, Syed Ali and Kaja Usain from Ammapettai in the Salem district, and Jesuras and Iliyas in the Coimbatore district.

While Syed Ali and Kaja Usain are from the Popular Front of India (PFI), and Jesuras and Iliyas are from the Social Democratic Party of India (SDPI), the police are investigating Sikkanther’s affiliations.

These are the first arrests in connection with the continued attacks in the state, which started with a crackdown on PFI leaders across the country on Thursday.

The police booked all three under Sections 153A (promoting enmity between different groups), 436 (mischief by fire or explosive substance with intent to destroy house), and 511 (punishment for attempting to commit offences punishable with imprisonment for life, or other imprisonment) of the Indian Penal Code.

The officials also said they might book the accused under the National Security Act (NSA), if they found the need for it.

Tamil Nadu South Zone Inspector General of Police Asra Garg told reporters that the state police were investigating the attacks, and nearly 20,000 police officers had been deployed in the south zone to monitor the activities.

“SP and DIG-rank officers are monitoring the night-round activities, and we have given the highest importance to the issue. In parallel, DSPs are meeting important persons from the suspected organisations. We will take decisive action against those involved in such activities, and if needed, we will detain them under the NSA,” he said.

Around 20 minutes after RSS functionary VG Rajan alerted the police after witnessing criminals attacking his house with Molotov cocktails on Saturday, the cops, led by Salem Deputy Commissioner Madasamy, reached the spot and started their investigation.

“After analysing CCTV footage, we have conclusive proof that the two suspects the police secured are the real culprits. They came by motorcycle, and we have seized the vehicle,” Salem Commissioner of Police Najmul Hoda told reporters.

The officials are yet to remand the accused in judicial custody as per the instruction of the DGP. They could detain the accused under the NSA.

Asked about the attacks, Hoda said the motive was the NIA raids against the PFI in the state.

However, he also said the remaining five suspects are under investigation and might be allowed to leave once they complete interrogation.

Coimbatore Commissioner V Balakrishnan told reporters on Sunday that the city police had arrested two SDPI functionaries for hurling Molotov cocktails on Friday on houses of BJP and Hindu Munnani members in Kuniyamuthur in Coimbatore.

The police arrested Jesuras and Iliyas under section 435 of IPC, section 3 of the Explosive Substances Act, 1908, and section 153 A of IPC on Sunday.

“The police will remand them in judicial custody after the investigation. We are zeroing in on the criminals in the remaining cases. We will arrest them soon”, Commissioner told the reporters.

Despite the arrests, the state police are investigating other incidents, like the one where an unidentified man hurled a Molotov cocktail at a BJP functionary’s house in Karumankoodal in the Kanniyakumari district on  Sunday.

Police sources told South First that the house belonged to one Kalyanasuntharam, and no casualties were reported.

“We began our investigations with the help of the CCTV footage we accessed, and will soon nab the criminals,” they added.

In a CCTV footage, also accessed by South First, an unidentified man wearing a helmet was seen hurling two Molotov cocktails at the house and fleeing the spot on a bike driven by another man.

In light of the rising number of incidents of attacks on BJP and RSS functionaries, the police have instructed fuel stations across the state to stop selling fuels in canisters, water bottles, and other containers.

“We have instructed all the fuel station owners, managers, and supervisors not to sell petrol in loose containers for a few days, and they have agreed to our demands and are following it,” Garg told reporters.

Answering their questions, he said the police had drawn up a list of leaders — including their offices, business establishments, and shops — deemed vulnerable targets and have provided them security.

He added that SP and DIG-level officials were personally monitoring the situation.

Earlier in the day, Tamil Nadu Deputy General of Police (DGP) C Sylendra Babu warned of decisive action against those disturbing public peace in the state.

According to the statement, the police had arrested some real criminals, with interrogation underway for as many as 100 members.

The hurling of Molotov cocktails began in Coimbatore, spreading to a few more districts in the state.

Additional Director of Law and Order, P Thamaraikannan, has camped in Coimbatore to monitor the activities.

“The police will arrest culprits involved in such criminal acts that disturb the public peace under the National Security Act,” the DGP stated in his statement.