Hyderabad: BL Santhosh not cooperating even after being served notice, police tell HC

The police also moved an ACB court for further custody of the accused in the Cash for MLAs case so they could continue the questioning. 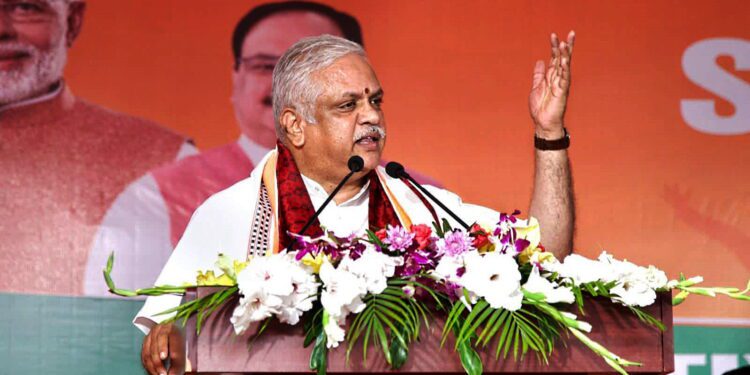 Exercising the legal option available to it, the Special Investigation Team (SIT) on Tuesday, 22 November, apprised the Telangana High Court that BJP general secretary (organisation) BL Santhosh has not been cooperating with them in their investigation of the cash for MLAs case.

The police told the high court that as advised by it, they had served notice to Santhosh through the Delhi Police, to appear before them on Monday, but he did not turn up.

They told the court that Santhosh was not cooperating. The high court then adjourned the hearing on the case to Wednesday.

In a related development, the three accused in the case — Faridabad Priest Ramachandra Bharati, Tirupati pontiff Simhayaji, and hotelier Nanda Kumar — filed a fresh petition in the high court seeking immediate suspension of the investigation of the case by the SIT.

In the ACB special court, the police moved a petition for custody of the three accused for further questioning for a week. After the counsel for the accused filed counters, the court adjourned the hearing to Wednesday.

According to sources, Santhosh is understood to have told the police that he cannot appear before the SIT now as he is busy in another state. He is said to have sought some time.

On Monday, after three of the four did not present themselves before the police, a lookout notice was issued for Jaggu Swamy.

The police alerted airports and the police commissioners and SPs of all districts in the country to look out for him as there was a chance that he could flee the country.

Police sources later confirmed to South First that a lookout notice had also been issued for Tushar Vellapally.

The SIT officials grilled Srinivas throughout the day on Monday and Tuesday, trying to find out the connection between him and Tirupati pontiff Simhayaji.

The police have evidence that Srinivas booked the air ticket for Simhayaji to arrive in Hyderabad from Tirupati on 26 October.

The police have also found that Srinivas called Simhayaji several times and asked him the reason. He told the police that he knew Simhayaji and that he always invited him to perform rituals in his house.

He said he did not know anything more than this and that he was in no way connected with the three mediators who allegedly tried to poach TRS MLAs.

Meanwhile, the TRS stepped up its attack on the BJP in general and Santhosh in particular in connection with the case.

This is especially after the BJP distanced itself from all three “emissaries” who stand accused of trying to poach four TRS MLAs for the saffron party.

TRS social media convenor took a dig at Santhosh on Tuesday by sharing an image that purportedly shows the BJP leader with one of the accused in the Cash for MLAs case.

Now you know why @blsanthosh doesn’t want to appear in front of the SIT enquiry #LotusLeaks pic.twitter.com/QXmKsRloxm

He shared another image of another of the accused, this time with a Union minister.

Ramchandra Bharti and Union Minister Muralidheeran , this is not in Kerala, this is in Haryana …
BJP leaders don't know him ?? 😀#LotusLeaks pic.twitter.com/fmxMRJQaSL

Telangana Chief Minister and TRS chief K Chandrashekar Rao has already unveiled three hours of footage of the alleged poaching effort, and has sent it to several people to see it for themselves.