As Covid-19 surges in China, the South Indian states are taking preventive measures to keep people safe from the infection. 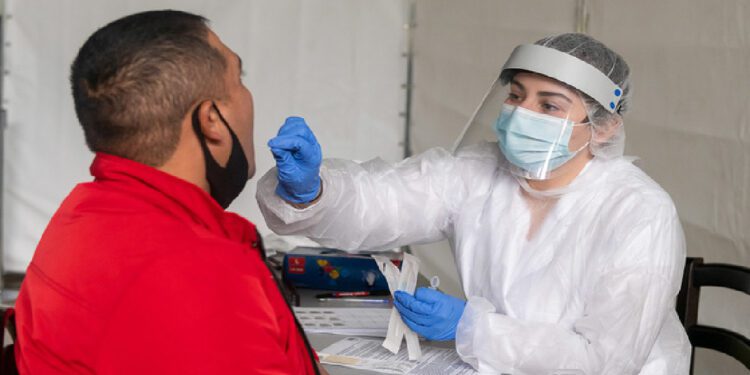 Karnataka Health Minister Dr K Sudhakar on Thursday, 22 December, said that in view of the increase in Covid-19 cases in several countries and the discovery of new variants, it had been decided to conduct mandatory tests for those with influenza-like illnesses (ILIs) and severe acute respiratory infections (SARIs) in the state.

Sudhakar also said that an advisory would be issued making masks mandatory in indoor, closed, and air-conditioned places.

“Union government guidelines will be followed for random testing and screening passengers arriving from abroad at international airports. Some people are already being tested at the airport,” he said.

Sudhakar also said that as the number of Covid-19 cases decreased, people became complacent about getting the third dose of the vaccine. Due to this, only 20 percent of progress had been made in third-dose vaccination.

In a circular, the Karnataka government asked health officials to conduct testing for all symptomatic patients, especially the symptomatic contacts of positive cases.

“Districts and the BBMP shall make adequate testing teams available so symptomatic testing is not missed,” read the circular.

“The exercise of 2 percent random testing of International arrivals at BIAL, Bengaluru, and Mangaluru Airport shall continue, and any further guidelines issued by GOI shall be followed,” it added.

The government also told officials to compulsorily send all positive samples with a ct value of less than 25 for Whole Genome Sequencing.

“The booster-dose vaccination shall be accelerated, in line with supplies, so that the coverage shall be improved from the existing 20 percent to 50 percent during December 2022-January 2023, by organising vaccination camps at all levels,” read the circular.

The government also strongly advised the general public — particularly the elderly and those with comorbidities — to wear face masks in all indoor areas and closed places like pubs, bars, restaurants, cinema halls, buses, flights, trains including metros, shopping malls, and offices.

Organisers are expected to follow guidelines for events such as public social activities, which should be held outdoors or in well-ventilated areas and preferably during the day, avoiding exposure to chill and cold in the early mornings and late evenings.

Congregations of a large number of people, more so in indoor areas, need to be strictly avoided.

Tamil Nadu Chief Minister MK Stalin participated in a review meeting by the health department. Following this, as per the circular issued by the Union Health Ministry, the state advised monitoring of the number of Covid-19 infections and whole genome sequencing tests for those infected.

In a statement, the department said that the XBB variant of Covid-19 is prevalent in the state at present.

“The BF.7 strain currently circulating in some Asian countries is a subtype of BA.5, and is not in the state. BA.5 infections were observed in Tamil Nadu in June, July and August,” said the department.

At present, even though the number of Covid-19 infections in Tamil Nadu has decreased, the bed facilities required for treatment in government hospitals, medicines, testing facilities and oxygen are available in sufficient quantity, and would be increased if required.

Medical officials have been tasked to monitor the spread of the disease and to monitor ILI and SARI cases.

The Andhra Pradesh government on Thursday said it was ready to handle any eventuality in view of the sudden spurt of Covid-19 cases in certain countries. It said it had sufficient manpower, beds, drugs, and oxygen for that purpose.

An official release said during the last 50 days, over 30,000 samples were tested, resulting in 130 positive cases, while there are some cases of the new Omicron subvariant XBB, which has features similar to Omicron.

The state has established an INSACOG genome-sequencing lab in Vijayawada. Mandatory positive samples from RT-PCR labs are being referred to this lab for further testing, said, Health and Family Welfare Commissioner J Nivas.

Two doses of vaccination were completed for the above-18 age groups of the population, including healthcare workers (HCWs) and frontline workers (FLWs).

The Andhra Pradesh government has established 29 RT-PCR labs across the state to test the suspected cases, while Covid-19 rapid-test kits were made available at Dr YSR Village Clinics to test any symptomatic persons.

After a high-level meeting of officials on Thursday, Kerala Health Minister Veena George said that all districts have been told to strengthen surveillance.

The number of tests would be increased and genomic sequencing of positive cases would be held to detect new variants.

“There is no reason to worry as the state is prepared to meet any eventuality. Hospitals have not reported any spike in admission. Hospital admissions are being monitored and facilities would be increased if required. We are constantly tracking whether the virus has undergone genetic mutation,” she said in a statement.

“The government is conducting genomic sequencing. Rajiv Gandhi Institute for Biotechnology and Kozhikode Medical College have facilities to do this,” added the minister.

She stated that vaccination clinics were still operating for booster doses despite the fact that the state had 100 percent coverage for the two doses of the Covid-19 vaccine.

The state has recorded 1,431 Covid cases in December so far, with 51 of them reported on Wednesday.

After the meeting, he said that as per the instructions of the Union government, positive samples would be sent to the Gandhi Hospital for genome-sequencing, and screening would be conducted at the airport.

There is no need to worry about Covid-19, but there is a need to be alert, said the minister.

Those who have not taken the Covid-19 vaccine should take it immediately and take a booster dose, he added.

The state also appealed to the public not to panic as the government was prepared to control the spread of Covid-19.

“Although we don’t have a spread of Covid-19, medical officials were asked to check everything carefully. The officials were ordered to keep human resources, medicines, oxygen, and ICU beds fully ready,” said Rao.

Prime Minister Narendra Modi on Thursday chaired a high-level meeting to assess the Covid-19 situation in the country, the preparedness of health infrastructure and logistics, the status of the vaccination campaign in the country, and the emergence of new Covid-19 variants and their public health implications for the country.

He cautioned against complacency and advised strict vigil. He reiterated that Covid-19 was not over yet, and directed officials to strengthen the ongoing surveillance measures, especially at international airports.

The prime minister stressed the need to ensure that the entire Covid-19 infrastructure at all levels was maintained at a high level of preparedness in terms of equipment, processes, and human resources.

He advised states to audit Covid-19-specific facilities to ensure the operational readiness of hospital infrastructure, including oxygen cylinders, PSA plants, and ventilators.

States have been asked to share a larger number of samples with the designated INSACOG Genome Sequencing Laboratories (lGSLs) on a daily basis.

This is expected to support the timely detection of newer variants, if any, circulating in the country, and facilitate the undertaking of requisite public health measures.

Meanwhile, the Union Ministry of Health & Family Welfare has issued “Guidelines for International Arrivals” in light of an increasing number of Covid-19 cases being noted in some countries across the world.

The ministry asked all travellers to preferably be fully vaccinated as per the approved primary schedule of vaccination against Covid-19 in their country.

As a precautionary measure, 2 percent of the total passengers arriving by flights would undergo random testing at the airport.

“Such travellers in each flight shall be identified by the concerned airlines (preferably from different countries). They will submit the samples and shall be allowed to leave the airport thereafter,” said the ministry in its guidelines.

It added that if such travellers’ samples tested positive, the samples should be further sent for genomic testing at the INSACOG laboratories. The people, meanwhile, would be treated or isolated as per laid-down standard protocol.

Children under 12 years of age were exempted from post-arrival random testing. However, if found symptomatic for Covid-19 on arrival or during the period of self-monitoring, they would have to undergo testing and treatment as per protocol.

“Waves due to Omicron subvariants were relatively mild in countries that witnessed earlier waves. China didn’t have waves after the first one. The virus spread will be faster, and mortality or hospitalisation cannot be compared to Omicron waves in other countries,” said Babu in a tweet.

He added that China would undoubtedly have a large wave, even if it underreported cases. It has already stopped testing asymptomatic individuals.

“The next question is how this situation affects other countries. Specifically, does it lead to newer variants? The more the virus circulates, the more are opportunities to mutate. According to GISAID data, approximately 23.6 mutations per year are identified in the SARS-CoV-2 sequences,” said Babu.