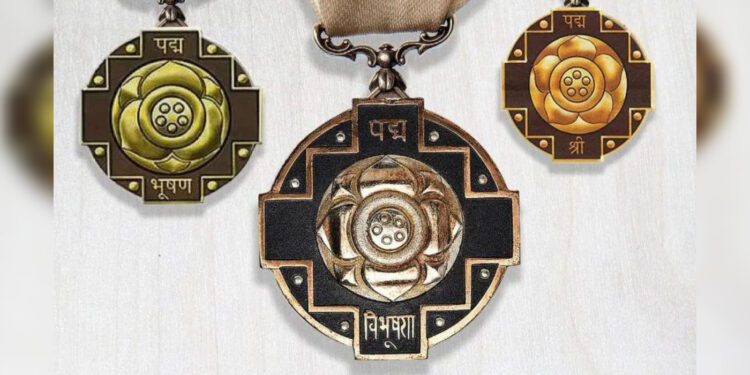 The Central government on Wednesday, 25 January, announced the names of the winners of the Padma awardees from across the country.

In total, the names of six Padma Vibhushan winners, nine Padma Bhushan winners, and 91 Padma Shri winners were announced on the eve of Republic Day this year.

The Padma awards are one of the highest civilian awards in India, given to individuals for their distinguished contributions in various fields such as art, literature, education, sports, medicine, social work, science, and public affairs.

The awards are announced every year on the occasion of Republic Day (26 January) and are conferred by the President at a ceremonial function.

There are three categories of Padma Awards:

The selection process for the awards is based on recommendations made by the Padma Awards Committee, which is headed by the prime minister and comprises a diverse group of members from different fields.

Here is the list of this year’s winners from the South Indian states:

Five people from Tamil Nadu, including legendary singer Vani Jayaram, have been conferred the Padma awards.

Vani has done playback singing for over 1,000 Indian movies, recording over 10,000 songs. She was bestowed with the Padma Bhushan award.

K Kalyanasundaram Pillai, the Bharatanatyam guru who is in his 90s, was picked for the Padma Shri award under the Arts category.

Under the Social Work category, the duo of Vadivel Gopal and Masi Sadaiyan — the snake catchers from Irular tribes — was picked alongside retired librarian Palam Kalyanasundaram, who has been donating his savings, pension, and award money to charity for the past 30 years.

Dr Gopalsamy Velusamy, the former director of the Central Research Institute for Siddha, was also conferred the Padma Shri award for his contribution to AYUSH.

Eight people from Karnataka, including the noted author SL Byrappa, have been given the Padma awards this year.

Veteran politician SM Krishna, at 90 years old, has served at various levels of Indian politics. He has been conferred the Padma Vibhushan under the Public Affairs category.

Noted writer SL Byrappa, the 91-year-old who authored 24 novels in a career over five decades, has been bestowed with the Padma Bhushan under the Literature and Education category.

Philanthropist Sudha Murthy, at 81, has carried out social works across the state. She is also the chairperson of the Infosys Foundation.

The octogenarian has been conferred with the Padma Bhushan under the Social Work category.

Under the Art category, Rani Machaiah (79) — an Unmathat Folk dancer from Kodagu who promotes and preserves Kodava culture — has been awarded the Padma Shri.

Another awardee is Munivenkatappa (72), known as the father of Thamata (folk instrument). He is from the old Mysuru region.

A third awardee in the category is Shah Rasheed Ahmed Quadri.

Khadar Valli Dudekula and S Subbaraman have been conferred with the Padma Shri under Science and Engineering and Archaeology categories, respectively.

Five people from Telangana have been bestowed with the Padma awards, including two Padma Bhusan and three Padma Shri.

Swami Chinna Jeeyar, awarded the Padma Bhushan this year, is a spiritual leader and head of the Chinna Jeeyar Ashram, a Hindu religious guru and yogi ascetic known for his spiritual discourses on Sri Vaishnavism.

He was born in a small village in Andhra Pradesh, near Rajamahendravaram, to a Tamil-speaking family on 3 November, 1956.

He operates spiritual centres in the US, is the designer and planner of the Statue of Equality, and was also involved in the development of the Yadadri temple in Telangana.

Kamlesh D Patel, also known as Daaji, is a spiritual leader and teacher who is the fourth spiritual guide in the Heartfulness tradition. He is also the other Padma Vibhushan winner from the state.

He is a popular speaker and has given many talks on various spiritual and personal development topics.

Patel has also been actively promoting Heartfulness Meditation as a way to bring about inner transformation and spiritual development and is considered as one of the key leaders in the Heartfulness community.

In his decades of perseverance, he has made immense contributions towards the preservation of tribal and southern languages like Kuvi, Manda, and Kui.

Modadugu Vijay Gupta is a noted agricultural scientist and expert who has made significant contributions to the field of fish farming and rural development in India and other developing countries.

He has developed and popularised low-cost and sustainable fish farming techniques that have helped to improve the livelihoods of small-scale farmers and rural communities.

He is considered a pioneer of the blue revolution of Southeast Asia.

His generous contribution to assist the unprivileged along with the society.

And finally, there is Dr Pasupuleti Hanumantha Rao, a specialist in developmental paediatrics, rehabilitation medicine, and Psychology. He started Sweekar, an NGO, in 1977.

Dr Rao started a school for the mentally challenged in his garage in 1977 as part of his clinic, with five children and two staff members. It has now grown to a 450-room facility with 150 dedicated staff serving, 1,700 beneficiaries per day.

He established three other nonprofit organisations: Upkaar, Aashray, and Suraksha. They care for the mentally, physically, visually, and hearing impaired, besides drug addicts, the aged, widows and the destitute.

Prakash Chandra Sood is an honorary professor at the Sri Sathya Sai Institute of Higher Learning.

During his professional career spanning six decades, he was associated in person with 66 Indian and 63 foreign academic and research institutions.

He has over 300 research publications, primarily related to nuclear structure physics,

They include Including 158 publications in prestigious international journals,

Then there is Sankurathri Chandra Sekhar, who used to be one of Canada’s immigrant success stories.

A student from India, he rose to a job as a biologist with Health Canada and settled in Ottawa with his wife, and two children.

He lost his wife and children to an act of terrorism. Three years later, he decided to move on.

In 1988, he sold his house in Canada, where he had been living for 2 decades and settled down in his wife’s village, Kakinada. He started the Sankurathri Foundation in 1989 with the aim of providing good health and educational facilities to the impoverished rural in the outskirts of Kakinada town in Andhra Pradesh.

Then there is Kota Satchidananda Sastry. Trained in the traditional narrative art Harikatha, he was awarded the prestigious Sangeet Natak Akademi in 2018.

He has monikers like “Harikatha Chakravarti” and “Katha Gaana Kalaa Kovida”.

Another awardee is Abbareddy Nageswara Rao.

He is the director of the Centre for Orchid Gene Conservation of the Eastern Himalayan Region, in Manipur. Rao is credited with the discovery of 33 new orchid species.

Two orchid species have been named after him — Dendrobium nageswarayanum, which was discovered by Krishna Chowlu from Arunachal Pradesh, and Tropidia hegderaoii by Sarat Misra from Tamil Nadu.

He is also part of the team that developed five new orchid hybrids from Arunachal Pradesh.

He is also credited with the discovery of 33 new orchid species — the highest by any scientist in independent India.

Of these new species, 28 were found in Arunachal, two in Meghalaya, two in Manipur, and one in Uttarakhand.

Yet another awardee is agriculturist CV Raju, who single-handedly revived the Etikoppaka toy industry by taking it back to its organic roots.

Raju, through a lot of research, re-identified plants, roots, and even forest weeds that could be sourced for creating dyes, bringing the toys back to their organic self.

His efforts to salvage the Etikoppaka toy industry were also lauded by Prime Minister Narendra Modi in his Mann Ki Baat series in 2020.

Then there is Krishnarajanagar Nagappa Ganesh, a bio-organic chemist and founder-director of the Indian Institute of Science Education and Research in Tirupati (IISER Tirupati).

He was also the founding director of IISER Pune, which was established in 2006.

His research work Ganesh is related to the chemistry and biology of nucleic acids, with a special focus on the applications of DNA analogues, the structural biology of collagen peptides, and DNA nanotechnology.

He is recognised for his contributions to the design of Peptide Nucleic Acid (PNA) analogues for effective cell permeation.

And finally, there is Koduri Marakathamani Keeravani, a Telugu music composer, record producer, singer, and lyricist.

Four people from Kerala have been awarded the Padma Shri.

The first is CI Issac, a retired history professor and vice-president of the Bhartheeya Vichara Kendram in Thiruvananthapuram. He is also a member Indian Council of Historical Research (ICHR).

He is the author of over 10 books, including Evolution of the Christian Church in India. In 2015, he called for a ban on conversions.

Then there is VP Appukuttan Poduval, a social worker from Kerala who is also called “Kannur ke Gandhi”. He actively participated in the Quit India Movement of 1942. He is also a proponent of khadi and a noted Sanskrit scholar.

Another winner is 79-year-old SRD Prasad, who teaches Kalaripayattu — a traditional martial art that originated in Kerala. It is one of the oldest martial arts in the world, with a history dating back over 3,000 years.

And finally, there is Cheruvayal K Raman, a tribal farmer from Wayanad. He is known for cultivating 45 varieties of paddy.

He is popularly known as “Nellachan”, and began his journey as a farmer at the age of 10. Raman belongs to the Kurichiya tribe and is hailed for preserving traditional paddy varieties.