The Bharat Jodo Yatra is a defining moment in contemporary Indian history, but only time will tell if it scripts a new chapter. 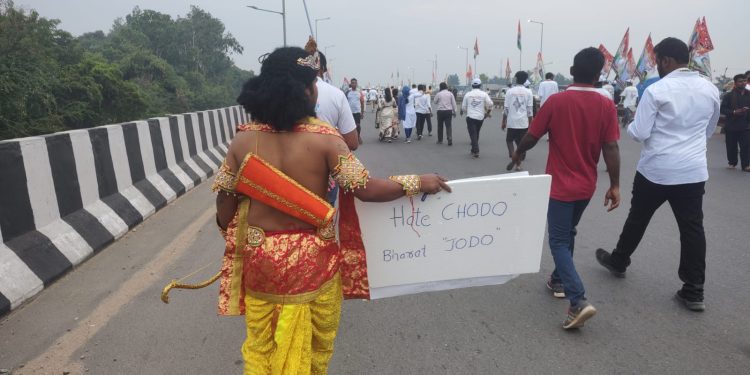 Rahul Gandhi's Bharat Jodo Yatra has been attracting both the committed and the curious. (South First)

It was a misty, wintry morning in Hyderabad. Travelling on well-lit, swanky flyovers and the Outer Ring Road circling the city, one is reminded of the Manhattans of the world that represent the privileged miniscule and set them miles apart from the vast majority dealing with multiple struggles on a daily basis.

Some 50 kms away from the city is Rudraram village, abutting the National Highway that takes one to Mumbai, and also home to the Indian Institute of Technology (IIT). The area was once the hub of industrial activity when public sector enterprises flourished. One of the few that survived the neoliberal capitalism model is Bharat Heavy Electricals Ltd (BHEL), struggling to stay afloat, while others, including the Indian Drugs & Pharmaceuticals Ltd (IDPL), which gave way to multiple corporates in the pharma sector, saw death over the years.

En route, one sees arches, banners, and posters welcoming Rahul Gandhi, currently on his Bharat Jodo Yatra. Some show him walking hand-in-hand with ordinary people, mostly from underprivileged sections. Only a couple of posters have pictures of Rahul with Sonia Gandhi, while one invokes memories of his grandmother, Indira.

Despite the chill in the air, by 6 am — the scheduled time for the yatra to commence its morning session — the place is abuzz with yatris, cultural troupes, and locals who turned up to get a glimpse of the Congress leader who walked out of his temporary container on the dot.

Walking along with RG is Dr Sravan, who did a Bachelor of Medicine (BMS) and practises in his hometown of Nanded. He joined the yatra in Kanniyakumari and plans to continue till it ends in Kashmir.

“What he has embarked upon is a good step. But people’s memory in India is short. They will forget this after six months. The Congress needs to build on the goodwill and positive image being created by the yatra to emerge as a strong and viable Opposition,” he says.

As if to remind us of our job, Sravan makes it a point to rub it in that the media is sold out. “They have their weakness. They are not highlighting inflation, joblessness, and reducing income. A second freedom movement is required.”

But the kind of protests seen in the past on any people’s issue are no longer visible in most parts of the country, Telangana included. Varsities in the state were headless for long periods and yet those in power are able to get away with the sheer lack of focus on education. Among the thousands of graduates coming out of colleges every year, the bright ones are burning the midnight oil hoping to crack law, engineering or government services entrance examinations, while the majority have no option but to turn into gig workers.

Also read: Why civil society says Rahul Gandhi is a leader with a difference

Of unemployment and disillusioned youth

Twenty-five-year old Praveen, a lab technician in Sangareddy town, some 10 km away from Rudraram, came along with his friends to see the yatra, though not a staunch Congress follower. Like most youth, he has his concerns over the current state of affairs.

“Most under 25 are disappointed with the Telangana Rashtra Samithi (TRS). But what I don’t understand is why my friends are attracted to the BJP. The local saffron leaders don’t even tell you what their vision is except saying that they will dig up mosques and pull out Shiva Lingams,” he laments.

A day earlier, when RG held a two-hour long meeting with a group of intellectuals that included retired judges and social scientists, he had the same question to ask: “Why are students not protesting?”

That is because the very same “intellectuals” who provided moral strength to the separate statehood movement have chosen to pick plum positions in the government and are, therefore, silent. “They will be the ones to attack us first if we ask questions of the government,” laments one in the group. That is not to miss the other important aspect that the basket of options for youth — both for study or employment later — still remains too small.

At the meeting, Rahul made it clear that he is not going to campaign for the Congress in the Bharat Jodo Yatra. “The challenge is much bigger. There is a need to shift public discourse to more serious issues, such as the need for welfare, protecting institutions, expanding the scope of opportunities and coming up with an inclusive agenda. And, parallelly, stop the divisive forces, irrespective of electoral victories or defeat.”

“Don’t expect the Congress to come up with super poll strategies and forge great alliances. What RG is doing is to appeal to the hearts of the people and he seems to have succeeded. This, at the very least, lays the foundation to take the next step — battle for the minds. Or else, one always ends up giving answers to their questions and it leads nowhere,” was how an erudite DMK leader describes the yatra so far.

Between the two walking sessions, one in the morning and another in the evening, RG meets representatives of various sections of society — women, youth, academia, intellectuals, lawyers, transgenders, and so on.

“I have driven through various parts of the country many times. But this experience of walking with people around is qualitatively different. I got a sense of the people, the country, the issues, and lots of information about what the problems are and how they need to be located,” he told one of them the other day.

“He is receptive to any idea and a good listener. He doesn’t pretend and overplay as if he has great respect for you. But he does hear the views expressed by others, even if he has an opinion on an issue,” says a retired Supreme Court judge, who was part of a small group that met Gandhi.

It’s perhaps this openness and warmth that drew 50-year-old Lalitha, who comes from a well-educated upper-caste background, to the yatra and somehow record her being a part of it. She was late by 10 minutes for the morning session one day and realised she could not catch up given the briskness with which the Gandhi scion walks. She returned for the evening walk.

“I could only catch a glimpse of him, but what I found was that people are interested in getting a sense of what he is doing. This is quite contrary to all the imagery that has been sold to us — that he is a ‘Pappu’, easy-going, club-going and what not.”

“He is quite deep, engaged, and determined to make a difference. There is no denying that,” recalls Kalpana Kannabiran, social scientist and legal scholar.

RG was particularly worried about the judiciary. “However bad a problem is, people always believed that they would get justice in courts. Do you think judges also think that the state should have greater control over its subjects or are they just committed to Hindutva?” he asked another person who knows the minds of the judges.

“They are mainly stuck in the mindset of discipline and control over what citizens can or cannot do. It’s also a function of the overall environment. If that changes, perhaps courts will also begin to change their approach,” was the answer.

Will Rahul be able to overcome the past sins of the Congress with even sections of liberal class, known for crass opportunism, still throwing questions at the party and him? It’s the same set of people who found a messiah in Narendra Modi in 2014. Disappointed for whatever reasons, some of them turned into bitter critics of the current dispensation while some continue to ask questions of the Gandhi family and pontificate that a yatra which does not have a political agenda serves no purpose.

“To say that the yatra does not have a political purpose is not right. He may not be doing the tu tu, mein mein others indulge in. It’s a well crafted strategy,” a political scientist reasons.

Aiming to galvanise the cadre

Prashant Dubey, one of the 100-plus Congress functionaries chosen to walk with Gandhi, says the yatra has achieved one internal purpose — spur state-level leaders and cadres into action, from the state of inertia and helplessness they were thrown into after the 2019 poll results. It could take some more time before the external impact (on people’s minds) is felt.

Kalpana Kannabiran is more unequivocal in extending support. “All of us know that the Congress was responsible for very many wrong things that happened in the past. All political parties, from the far left to the extreme right, suffer from cronyism. Even during the Congress/UPA period, there was institutional abuse. Despite all the political depredations, there was intellectual engagement and a certain space to resist when the state did anything wrong. Institutional autonomy still existed. What we are seeing now is the packing up of institutions, which is extremely dangerous.”

While it is given that former prime minister Dr Manmohan Singh or Sonia Gandhi gave thrust to liberalisation as much as anyone else, credit is also due to them for some far-reaching reforms such as the Land Acquisition Act, National Food Security Act, Right to Education and Information, MNREGS and the concrete steps towards setting up of the Equal Opportunity Commission based on the recommendations of the Sachar committee.

If some see Bharat Jodo Yatra as a defining moment in contemporary Indian political history, for the likes of Kalpana Kannabiran, it’s a “Rahul Lula Moment”. Only time will tell if Rahul Gandhi is indeed scripting a new chapter.