Hyderabad-based gay couple Supriyo Chakraborty and Abhay Dange, who got married in December 2021, seeks recognition of the marriage. 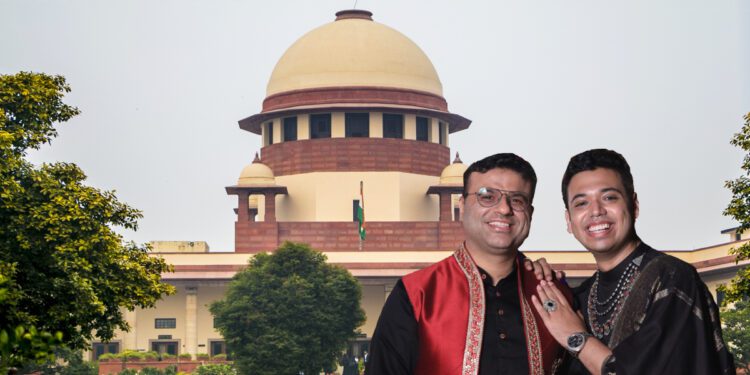 The Supreme Court on Friday, 25 November issued notice to the Central government and Attorney General R Venkataramani on two pleas by gay couples seeking a direction that their same-sex marriage is recognised under the special marriage law.

One of the gay couples is Hyderabad-based Abhay Dange and Supriyo Chakraborty. The other is Parth Phiroze Mehrotra and Uday Raj.

The Public Intrest Litigation (PIL) filed by Chakraborty and Dang said that they have been a couple for almost 10 years, and that they had a commitment ceremony in December 2021, where their relationship was blessed by their parents, family, and friends.

Now, they are seeking that their marriage be recognised under the Special Marriage Act.

“Issue notice returnable in four weeks. Liberty to serve the central agency. Notice be also issued to the Attorney General for India,” the bench said.

In Telangana, for the first time, the two men celebrated a same-sex union with a wedding ceremony on 18 December, 2021, at the Trance Greenfields Resort on Vikarabad highway in the outskirts of Hyderabad.

Dange and Chakraborty applied mehndi and exchanged rings. Two men want their wedding to normalise same-sex relationships in India to help those in the closet come out.

The law that criminalised gay sex was struck down the law in 2018, but there’s no law allowing same-sex marriage.

The wedding was attended by close friends, family, and members of the LGBTQ+ community. The duo announced the wedding in October and Tollywood actor Samantha Ruth Prabhu retweeted the news congratulating the couple.

Chakraborty from Kolkata and Dange from Delhi were living together for eight years before finally deciding to make it official.

Now, they have approached Supreme Court to legalise same-sex marriage.

These and other pleas in the Supreme Court have sought recognition of same-sex marriages under the Special Marriage Act.

As there are already cases before Kerala and Delhi High Courts regarding legalising same-sex marriage, the Supreme Court on Friday transferred those pending cases before itself.

Senior advocates Mukul Rohatgi, Neeraj Kishan Kaul, Menaka Guruswamy, and advocate Arundhati Katju argued that this was a sequel to the 2018 Constitution Bench judgment in the Navtej Johar case in which homosexuality was decriminalised.

“This is a living issue, not a property issue. The impact is on health and succession. We are only here talking about the Special Marriage Act,” said Mukul Rohatgi.

They sought a direction that the right to marry a person of one’s choice be extended to persons belonging to LGBTQ+ (lesbian, gay, bisexual, transgender, queer, and others) community.

The petitioners said the Special Marriage Act of 1954 should grant same-sex couples the same protection it allows intercaste and interfaith couples who want to marry.

The plea said that the non-recognition of same-sex marriages violates the Rights to Equality and Life under Articles 14 and 21 of the Constitution.

The plea said marriage brought with it a host of rights, privileges, and obligations bestowed and protected by the law.

“At the heart of personal liberty lies the freedom to choose who we are, to love whom we will, and to live a life that is true to our conscience, not only without the fear of persecution but in full-hearted joy and as equal citizens of this country. Despite being free to love each other, Supriyo and Abhay still cannot have a happy marriage filled with joy and recognition,” the petition said.