Congress MP Jairam Ramesh also called the AIMIM a “vote-cutting party”, and said it reduces the Opposition's vote share to help the BJP. 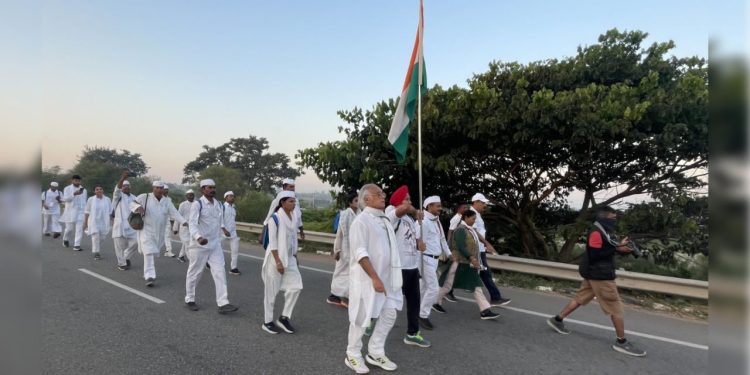 Congress leader Jairam Ramesh on Tuesday, 1 November, unleashed a scathing attack on the ruling TRS in Telangana, as part of which he called the state’s Chief Minister and Telangana Rashtra Samithi (TRS) chief K Chandrashekar Rao the “eighth Nizam” of Hyderabad, albeit in a veiled manner.

Talking to reporters on the sidelines of the Bharat Jodo Yatra in Hyderabad on Monday, the former Union minister claimed the state’s infrastructure was crumbling and blamed the chief minister for it.

He also targeted KCR’s son and the state’s Industry and IT Minister KT Rama Rao.

Earlier in the day, KTR slammed Congress leader Rahul Gandhi, who has been leading the yatra since it began in Tamil Nadu.

In his continuing broadside, the Rajya Sabha member also targeted the All India Majlis-E-Ittehadul Muslimeen (AIMIM), the BJP, and even the Aam Aadmi Party (AAP).

About the yatra, he claimed its aim was not to win elections.

“We hope that the yatra helps strengthen the Congress organisation and therefore elections performance, but that’s not the primary goal,” he said.

This comes at a time when the Congress is projected to come in third — after the BJP and the TRS — in the Munugode Assembly by-election on Thursday.

In a direct attack on the TRS in general and KCR in particular, Jairam claimed in his conversation with reporters that the current Telangana chief minister had not developed Hyderabad, but had instead inherited it from the Congress. He repeated the charge when talking to South First.

He also took a veiled dig at KCR, saying: “We live in a democracy. The Congress is not a party that runs on Nizam Shahi. We know the eighth Nizam is sitting in Hyderabad.”

On KTR’s jibe that Rahul Gandhi could not get even win his pocket borough of Amethi in Uttar Pradesh, Jairam decided to indulge in a bit of whataboutism.

He said the TRS — which was planning to take the party nationally — could even go global, but one must remember that its leaders were embroiled in a passport scam in 2007.

Later, in conversation with South First, Jairam said the response to the Bharat Jodo Yatra across South India had been good.

He added that the party was expecting a similar response in states across central and northern India, even though most of them are ruled by the BJP.

In reply to another question by South First, he admitted that Congress needed to get its own house in order before aiming higher.

“We cannot have a blind anti-BJP movement. A blind Congress in the past has cost the country. We need Opposition parties to come together on a common platform and form an agenda. Just opposing Modi can not go on,” he said.

Ramesh, who is a former Union Minister of Environment and Forest development, did not spare other local or national parties either. He said that while the AIMIM was initially a constituent of the UPA, it changed its brand and has now joined the BJP.

He claimed that while the AIMIM takes oxygen from the BJP, it gives the saffron party a booster dose.

He later told reporters that the AIMIM was essentially the “VCP” — a “vote-cutting party” — reducing Opposition parties’ vote share to help the BJP.

“AIMIM and BJP are two sides of the same coin,” Ramesh noted.

He levelled a similar charge against the AAP, claiming both it and the AIMIM were B-teams of the BJP.

Asked whether the Congress — if it came to power — would welcome the AIMIM back into its fold, Ramesh replied in the negative, saying on a sarcastic note that the parties had undergone a “single talaq”.

Taking a swipe at the BJP’s Gujarat model, he said that while the saffron party was building aircraft, it was unable to build a bridge, referring to the Morbi tragedy in which around 150 people lost their lives.