Apart from several women narrating their ordeals, the discussion included the need for a budget for women, healthcare, and policies for the marginalised and the LGBT community. 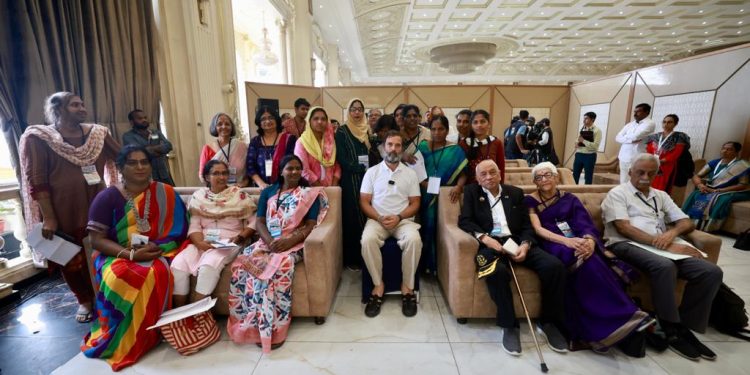 Several women’s issues, such as economic support through a budget meant solely for them, healthcare, and policies for the marginalised and the LGBTQ community, were discussed.

On its seventh day in Telangana — the fifth and last southern state it has covered — the march entered Hyderabad via the Matha temple in Shamshabad.

The meeting took place around 2 pm on Tuesday at the Legacy Palace in Bahadurpura, where the march halted for the midday break.

After the meeting, the march resumed from Hussaini Alam junction and reached Charminar, where the tricolour was hoisted.

The next destination was the Indira Gandhi statue at Necklace Road, where newly elected Congress president Mallikarjun Kharge addressed a public rally.

Women Budget, Health Care, policy for #LGBT and the most marginalised, the gist of a wonderful interaction today of women groups with @RahulGandhi ji in #Hyderabad #BharatJodoYatra @Jairam_Ramesh pic.twitter.com/0NIvkEEV4l

Rachana Mudraboyina spoke about the issue of healthcare for the LGBTQ community and the need for a nationwide census of transgenders.

She told South First: “All local health clinics should be transgender-inclusive. Free-of-cost surgeries should be there for transgender people, and treatment should be made available in government hospitals.”

The activist added: “We also asked for research and studies to be conducted by educational institutes on the health front of the LGBTQIA community. We also demanded a one-person reservation in the education system for transgender people to navigate through the system. Another demand was to set up a national-level commission for the community.”

Rahul Gandhi asked them about transgender committees. The representatives said they did not have the number with them. “We have only a 2011 census of 5 lakh transgender people,” said Mudraboyina.

Bodasu Pavani, a domestic worker, spoke about the issues of social status and dignity of domestic workers, as well as working conditions after the Covid-19 pandemic.

“I lost my job and was not even paid due to the lockdown. We spoke to Rahul Gandhi about the need for a welfare board that will register all domestic workers and extends maternity, pensions benefits, ESI card, and Samajika Chatham (home as a workplace where all workers will be protected under various acts and schemes) housing facilities,” Pavani of Prakash Nagar told South First.

She also spoke about the need for a welfare board that would concern itself with the issues of domestic labourers.

Individuals, including Rizwana, touched upon the economic support for the education of Muslim women, whereas Sultana shared her experience with online trolling and harassment.

An acid attack survivor, while explaining the nightmarish incident, sought healthcare support and the implementation of a ban on the sale of acid.

Suguna, a slum dweller, narrated how she was forcibly evicted from a slum in Hyderabad.

Salamma shared her everyday challenges of being a garbage truck driver.

After listening to the experiences and suggestions of women and transgender individuals and representatives, Gandhi, a Lok Sabha member from Waynad in Kerala, noted that gender issues topped the list of his priorities.

“Women’s issues are very important to me and are close to my heart. I consider problems concerning women the single most important issue in India,” he said.

Rahul Gandhi also emphasised the need for an all-around focus on women’s empowerment and development.

On its final day in Hyderabad on 2 November, the march resumed at 6 am from Balanagar and went on till Hafeezpet before adjourning for a scheduled break.

The march resumed at 4 pm from the BHEL Bus Stand and went on till Muthangi.

The night halt is scheduled at Koulampet in the Medchal district.