Water tanks, exclusive schemes — and the othering of Dalits in Tamil Nadu

The schemes are not confined to Tamil Nadu alone. Experts feel such schemes prevent Dalits from joining the mainstream. 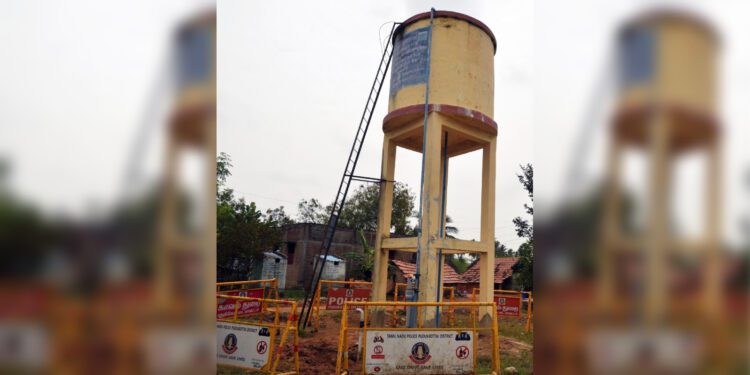 The water tank at Vengaivasal that will be demolished. (Supplied)

On 16 December last, a three-year-old boy from Vengaivasal in Tamil Nadu was admitted to the Pudukkottai Government Medical College with acute diarrhoea.

A doctor grew suspicious when two other children from the village were taken to the same hospital with similar symptoms in the next couple of days. The physician suggested the villagers check the water.

The villagers checked the water tank and found human excreta. The tank was the lone one that provided potable water to 30-odd Dalit families.

A vision — but a mission? 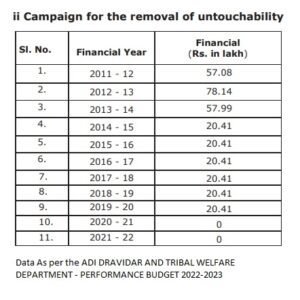 The Tamil Nadu Adi Dravidar and Tribal Welfare Department has a noble vision: “To attain the integrated goal regarding the welfare of the people belonging to Adi Dravidar and Scheduled Tribe communities and those below the poverty line, women and children in particular by 2030.”

Repeated atrocities against Dalits throw into question if the government is moving towards achieving the vision. The Vengaivasal incident might make one think twice before answering.

The incident could not be portrayed as the offshoot of hatred between two communities, the caste Hindus, and the scheduled castes. It should be looked at from a wider perspective.

Related: Why haven’t we heard enough of the Keezhvenmani massacre?

The othering of Dalits

In Tamil Nadu, there are nearly 4,200 overhead tanks constructed across villages, particularly for the Dalit community.

“Isn’t it state-sponsored discrimination?” A Kathir, the managing director of Evidence, an NGO working for the prevention of atrocities against scheduled castes communities, asked.

“The government has decided to construct a new overhead tank after demolishing the existing one, especially for the Dalits, at Vengaivasal. What purpose would it serve,” he asked in a conversation with South First.

Kathir has a pertinent point: “Why can’t the state construct a water tank common to all in the village? Only such a move could lead to a harmonious existence of all communities.”

Related: Dalit-raised temple bull out of in Palamedu Jallikattu

Tamil Nadu implemented the Scheduled Castes and Sub-Plan (SCSP)/Tribal Sub-Plan (TSP) in 1980-1981 for the socio-economic and educational development of the Adi Dravidar and Scheduled Tribe people.

The Adi Dravidar and Tribal Welfare Department was set up in 1988, trifurcating the Social Welfare Department. After setting up the department, the state allotted funds and subsidies for Dalit welfare. Separate residential facilities and resources needed for their livelihood, too, were provided.

Kathir said that the separate facilities amounted to the othering of the Dalit community.

“Throughout the state, people belonging to scheduled castes are kept out from common residential areas. Why should there be separate colonies for Dalits,” the activist asked.

He held “othering” responsible for the continuing discrimination and atrocities against Dalits.

“When the atrocities against the scheduled castes were high during the late 1980s, the then DMK government implemented several schemes for Dalits. Everything, such as water tanks, burial grounds, and pathways, was given to them separately.”

People started enjoying them and considered them a privilege. “But viewing it at a micro-level, it was a deft political move to keep the vote bank intact. The Dalits failed to see the discrimination meted out to them by the government,” he told South First.

Karuppiah felt there is only one solution to the issue. Officials formulating schemes for the marginalised should have a long-term vision to bring them to the mainstream.

He added that the discrimination they face, mostly in rural areas, force them to migrate to cities. “Though the laws are stringent, they are not strictly implemented. It will continue as long as the government makes the scheduled caste people live separately,” Karuppiah said

Aloor Shanavas, MLA of Viduthalai Chiruthaigal Katchi (VCK), differed. “We can’t term it government-sponsored discrimination. It is common elsewhere too that people started to live in groups and that’s why we call it a community,” he pointed out.

“When the Dalits were not allowed to — or segregated from the common civil society — they started to live away from them (caste Hindus) in groups and it became necessary for the government to provide them facilities such as water, roads, schools, burial grounds, etc,” he opined.

Shanavas, however, felt that it is time for a change.

“Earlier, we only sought such facilities for Dalit colonies. But now it’s time to take the next step for their upliftment. We need to ensure that they join the common civil society. When the facilities are for common use, the discrimination would come down,” he told South First.

He further stated that instead of celebrating “equality feasts” —  having food in Dalit houses — the government should intensify its campaign against untouchability and atrocities against the scheduled caste communities and spread the idea of social justice in villages deep-rooted in caste-based discrimination.

“The government must protect the scheduled castes when they are discriminated against. Each citizen enjoys the right to live with dignity and in a healthy environment, and it is the duty of the government to provide them with the basic facilities,” he said on condition of anonymity as he is not authorised to speak to the media.

He stated that such separate facilities ensured the scheduled castes live without depending on others.

The official added that there were no separate facilities for Dalit villages earlier, and the villagers were forced to bow to others for their needs.

“The discrimination then was high. Only after such separate privileges, such as separate water tanks, schools, burial grounds, etc, were given to the marginal groups that the discrimination came down to some extent,” he added.