Anand is a hyperspectral satellite from Bengaluru space start-up Pixxel, and Thybolt is from Hyderabad start-up Dhruva Space. 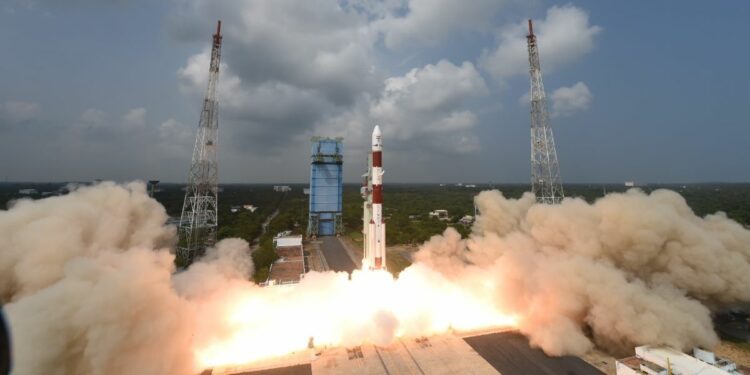 Launch of PSLV with Oceansat and other satellites. (ISRO/Twitter)

A tall, bearded young man with a receding hairline hunched over his computer even as six of his colleagues — all clad in black — peered over his shoulders on Saturday, 26 November.

An enlarged photograph of a rocket spewing fire during blasting off adorned the far end of the room with transparent, glass walls that provided a view of Hyderabad’s Begumpet locality.

Seconds later, he abruptly sat back, visibly relieved and clapping, while those around him joined him, cheering. One of them couldn’t hold back the excitement and he had to do little hops with both hands up in the air as if celebrating a win.

The youngsters at Dhruva Space seemed to be on cloud nine. Simultaneously, an almost similar scene was unfolding some 560 km away in Bengaluru.

A few seconds ago, ISRO’s PSLV rocket had lifted off from Satish Dhawan Space Centre, in Sriharikota, Andhra Pradesh, and placed an earth observation satellite and eight other satellites, including three designed by Bengaluru- and Hyderabad-based space start-ups, in multiple orbits.

It was one of the longest missions for the polar satellite launching vehicle.

Anand, a hyperspectral satellite developed by Bengaluru-headquartered space start-up Pixxel, is a technology demonstrator for the capabilities and commercial applications of a miniaturised earth-observation camera to be placed in a micro-satellite in low-Earth orbit.

Two satellites — Thybolt 1 and 2 — were by the Hyderabad space start-up Dhruva Space, and another one, Astrocast, was from US-based Spaceflight.

“The qualification of this 0.5U platform with its sub-systems will enable many more amateurs across India to learn, build, launch and operate experiments on amateur satellite missions using the P-DoT satellite platform,” Dhruva Space said on its website about Thybolt 1 and 2.

It’s official: our #ThyboltMission satellites are in #Space!

Here’s the moment we learned of a successful separation of Thybolt-1 & Thybolt-2 from our 1U Satellite Orbital Deployer onboard #ISRO’s PSLV C54! pic.twitter.com/x8QuVP4NJE

After a flight of about 17 minutes, PSLV successfully placed its primary payload, Earth Observation Satellite (Oceansat), at an altitude of about 742 km, while the passenger satellites were placed sequentially in sun-synchronous orbits after lowering the altitude of the rocket to about 528 km.

The Earth Observation Satellite-6 is the third-generation satellite in the Oceansat series.

This is to provide continuity services for Oceansat-2 spacecraft with enhanced payload specifications as well as application areas.

The mission objective is to ensure data continuity of ocean colour and wind vector data to sustain operational applications.

This was PSLV’s 56th flight. The mission is the fifth and last mission for ISRO in 2022.

As the 25.30-hour countdown which began on Friday concluded the rocket lifted off at a pre-fixed time at 11.56 am today, 26 November.

PSLV-C54/EOS-06 Mission is accomplished. The remaining satellites have all been injected into their intended orbits. pic.twitter.com/5rFSRFzwWz

The 44.4-metre-tall PSLV was launched from the Satish Dhawan Space Centre in Sriharikota, about 115 km from Chennai.

The remaining customer payloads included ISRO Nano Satellite-2 for Bhutan (INS-2B) which would have two payloads namely NanoMx and APRS-Digipeater. NanoMx is a multispectral optical imaging payload developed by the Space Applications Centre while the APRS-Digipeater payload is jointly developed by the Department of Information Technology and Telecom, Bhutan and U R Rao Satellite Centre, Bengaluru.

“The successful launch of two nano-satellites… is a milestone in the history of the country’s enterprising start-ups. Another great success in the history of satellite launches by the private sector,” the chief minister said.

Dhruva’s achievement comes soon after the success of the recently launched ‘Vikram-S’ satellite by Skyroot, a member-company of T-Hub, Hyderabad’s innovative business incubator.

The chief minister said the success Vikram S and Thybolt 1-2 has given a good start to the launch of private rockets aimed at increasing India’s share in the global space economy.

The chief minister said he was confident that T-Hub, which aims to bring out the talent of enthusiasts and create opportunities in the fields of science and technology, would achieve many more milestones in the future.

KCR also felicitated the IT and Industries Minister KT Rama Rao and senior officers and staff of T-Hub.

“I would like to share the happy news of the separation of the remaining eight satellites as expected into the new orbit which is lowered from original orbit of the EOS-06 satellite to perfection that is from 732 kms to 513 kms in a circular sun-synchronous orbit,” he told reporters after the launch.

“PSLV-C54 in its fourth stage has done this orbital change for the very first time using two-burn sequence,” he added.

Elaborating on the eight satellites, he said in these payloads, the India-Bhutan satellite was the last one to separate.

“Before that, we had the Astrocast 1-4 from Spaceflight US, and Thybolt 1 and 2 from Dhruva Space and Anand satellite from Pixxel India. So, congratulations to all the satellite teams for having their satellites in perfect orbit. All the best to them,” he added.

Referring to the India-Bhutan satellite, Somanath said: “It is a very important milestone in the history of the joint collaboration of Indian and Bhutan scientists.”

(With inputs from PTI)