Home » News » From Kerala to Karnataka, Congress’ Bharat Jodo Yatra has changed and it isn’t just the crowds

From Kerala to Karnataka, Congress’ Bharat Jodo Yatra has changed and it isn’t just the crowds

byAnusha Ravi Sood
A A 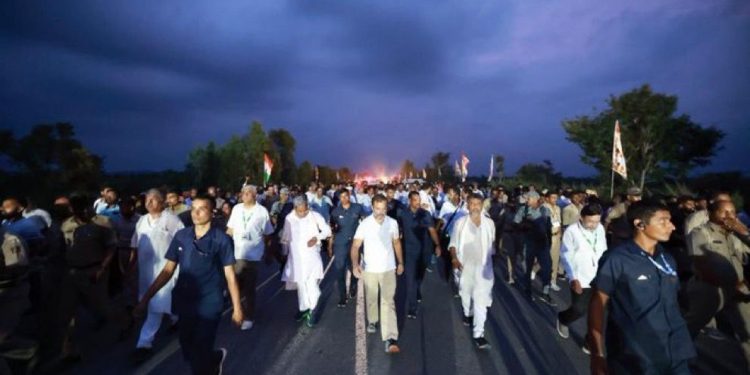 Congress leader Rahul Gandhi on his Bharat Jodo Yatra is in Karnataka. (Supplied)

A little over a month since it began, the Bharat Jodo Yatra has changed.

Crowds snaking through highways, towns and villages, yatris walking in groups sloganeering, supporters and fans rushing to get photos with Rahul Gandhi, hundreds of posters, billboards and cut-outs along the yatra route and dozens of social media posts by the Congress focused on perception-building around the walkathon.

While they all seem to paint the same picture of the yatra from Kanyakumari to now in Karnataka, a closer look will tell you that the yatra is not the same anymore.

Things have changed and it is not just the crowds or the weather. Even as Congress continues to be kicked about the momentum of the yatra, the approach to making the yatra a success has changed.

Mobilising crowds in a poll-bound state

For anyone who has tracked the yatra in Kerala and now in Karnataka, what stands out instantly is the crowd. The crowds — of supporters, cadre, as well as onlookers — in Kerala was continuous, largely organic and deeply invested in the yatra. One might credit it to Kerala’s bipolar political contest, Congress’ grassroots cadre and Rahul Gandhi’s personal popularity as an MP from the state. But it has got more to do with the geography and political temperament of Kerala.

“There wasn’t a single stretch of uninhabited region on the yatra route in Kerala. There were people everywhere, constantly. But in Karnataka, we pass through regions that are entirely uninhabited. In Kerala, we saw people line up along the yatra route throughout because all regions are populated, but that isn’t the case in Karnataka,” Yogendra Yadav of Swaraj India, who is the most prominent non-Congress face of the Bharat Jodo Yatra, told South First.

In Karnataka, the first state ruled by the BJP that Bharat Jodo Yatra has entered, politics is a three-way path. What’s more, it is an election-bound state and the yatra has become both — a challenge in organisational mobilisation as well as a platform for political war against the ruling BJP.

The large state has many sparsely inhabited regions, yet the crowds at Karnataka have been bigger thanks to crowd mobilisation that has turned into a competition among Congress leaders and ticket aspirants ahead of the Assembly polls. During the Tumakuru stretch of the yatra, one can see the cloud of dust first and then the crowds causing it.

Other than the yatris, hundreds of party workers and cadres walking in the yatra, one can find members of self-help groups from Devanahalli to whole families from the villages of Sakaleshpura brought in tens of buses from their towns and districts.

Refreshment counters every one kilometer, free food at break locations, a constant supply of snacks and water keep the mobilised crowds going. People from towns and villages through which the yatra passes still line up outside to get a glimpse of Congress leaders, but very few join the yatra.

“It is very difficult to walk in this heat,” Jayamma, a resident of Tavarekere in Turuvekere of Tumakuru said even as she was excited about seeing the yatra pass by her village. “The weather in Kerala was not as taxing as Karnataka,” a yatri said.

KPCC President DK Shivakumar, an ace mobiliser and logistics manager for Congress, is going to great lengths to ensure crowds aren’t a disappointment.

The other notable change has been Congress’ own approach to the yatra. Whether it is because Karnataka is a poll-bound state or because those planning the interactions, meetings, PR alongside the yatra have gotten a better hold of things, Bharat Jodo Yatra in Karnataka has come to be more mature, more political and more impactful.

Lahar Singh alleged that naxal sympathisers had been running a media house using a “slain journalist’s name”. He was referring to Gauri Lankesh. In a rare display of defiance, Congress went on the offensive to get Gauri’s family walking in the yatra.

On Sunday, Rahul Gandhi walked with a Dalit family that had been fined and banished for touching a deity. Earlier last week, he interacted with families of those who lost their lives due to oxygen shortage in Chamarajanagara government hospital during COVID19.

Prime Minister, do listen to Pratiksha, who lost her father due to BJP govt’s COVID mismanagement.

She pleads for govt support to pursue her education and meet her family’s needs.

Don’t families of COVID victims deserve fair compensation? Why are you denying them their right? pic.twitter.com/i4J2j3U3iR

Earlier this week, he interacted with educationists, education activists and stakeholders in the Public Education Department where saffronisation of syllabus was discussed at length. These interactions, topics, associations have been deeply different from the meetings he has held with various groups in Kerala. The politically loaded interactions in Karnataka are a direct challenge to the BJP ahead of the polls.

The Bharat Jodo communications team too has upped its game. From merely dispensing photos, videos of the yatra, the team has now begun identifying stories to narrate through the yatra and assess impact of the yatra.

Bharat Jodo Road and the merging colours of India.#BharatJodoYatra pic.twitter.com/wVrQJLXX2V

Whether it is the building of ‘Bharat Jodo Yatra road’ as a sign of communal harmony at Badanavalu or the plight of Soliga tribe in Gundlupet, the image management wing of the yatra is on a high.

After a month on the road, things have changed for the yatris too. They no longer are troubled by bruises and boils on their feet.

“Our systems have now gotten used to the long walks. The pace is getting faster and we have each others sloganeering company to keep going,” Ruby Khan, a Bharat Yatri from Madhya Pradesh told South First while on the walk.