CM Bommai was reacting to a flare-up of Karnataka-Maharashtra border tensions with the state's buses being defaced across the border. 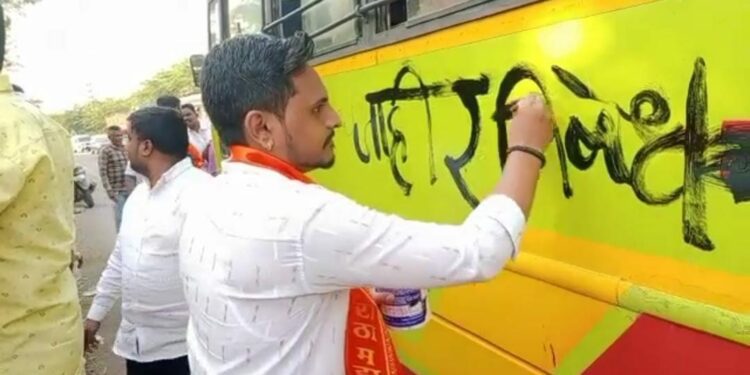 Jai Maharashtra slogan being painted on a Karnataka state bus in Maharashtra. (Screengrab)

Even as the BJP is hard-selling its “One Nation, One Policy” theory, Bommai referred to India as a Union of States, echoing Congress leader Rahul Gandhi and in tune with the Constitution.

“India is a Union of States. Every state has its own rights. Law is very clear and it is the duty of respective governments to maintain peace, law and order, and see that there is a peace and tranquility between two states,” Bommai said on Friday, 25, November, while answering reporters’ questions on the Karnataka-Maharashtra border dispute that has flared up again in the past few days.

While Bommai was quoting from the very first article of the Constitution of India, the “Union of States” idea is not exactly in tune with the nature of the Indian State the BJP would like to usher in.

When Rahul Gandhi was criticised for same stance

Whether or not other BJP leaders were in agreement with Bommai, Congress leaders welcomed his statement with enthusiasm, largely to point out that former AICC president Rahul Gandhi too had expressed similar views.

However, when Rahul Gandhi said “India is a Union of States” on various platforms, including in the Lok Sabha and at an event in London, BJP leaders were irked by his remarks.

Criticising Rahul Gandhi, BJP IT Cell in-charge Amit Malviya had said: “Rahul Gandhi’s claim that India is not a nation but a “Union of states” is deeply problematic and dangerous. It not just betrays his lack of understanding of our Constitution but also strikes at the core idea of independent India. It seeds the idea of India’s Balkanisation.”

Another BJP leader, Assam Chief Minister Himanta Biswa Sarma, said Rahul Gandhi was speaking of “dividing the country”. He criticised Gandhi over his “India is a Union of States” statement in May 2022.

A day after Rahul Gandhi made his comment, BJP’s Godda (Jharkhand) MP Nishikant Dubbey gave a notice for breach of privilege against him, claiming the MP from Kerala’s Wayanad had made an attempt to “incite MPs and the nation” in the Lok Sabha in February 2022.

Even after severe criticism from BJP leaders, Rahul Gandhi stood by his words.

“If you recall my speech in Parliament, I quoted the Constitution which states that India is a Union of States,” Rahul Gandhi had told South First in response to a question during the Bharat Jodo Yatra.

Now, Congress leaders, party workers, and netizens are all over BJP.

The netizens were quick to post screenshots of Amit Malviya, Himanta Biswas Sarma and other BJP leaders criticising Rahul Gandhi for the same remarks made by Bommai.

When Rahul Gandhi reminded the PM and his drumbeaters of this Article 1 of our Constitution he was attacked. Now Mr. Bommai is saying the same thing. https://t.co/4cQH2Myj5e

Finally, #Bommai deviates from Modi’s one-nation line to adopt #RahulGandhi’s line😊 Remember the ‘India is a union of states’ debate. This will make #MKStalin and DMK happy too. As Bommai says, the law, the Constitution is and was always clear. pic.twitter.com/tqllHlAnhZ

Taking a dig at the BJP, hundreds of netizens, many of them supporters of the Congress, sought to know how the BJP would react to Bommai’s statement.

Netizens also tweeted photocopies of the Article 1 of the Indian Constitution.

Top BJP leaders, including Amit Malyiva, have neither commented on Bommai’s statement nor responded to the criticism of the followers of the grand-old-party.

Meanwhile, condemning the Karnataka chief minister’s take on the border dispute, members of the Maratha Mahasangh not only staged a protest but also painted “Jai Maharashtra” on buses of the North Western Karnataka Road Transport Corporation (NWKRTC), one of the transport corporations of Karnataka.

Enraged by the actions of the Maratha Mahasangh, Kannada activists from the border districts threatened to do the same to Maharashtra buses.

Countering the Maratha Mahasangh, members of the Karnataka Nava Nirmana Sene used black paint on some buses of Maharashtra at Ballurgi village in Afzalpur taluka in Kalaburagi. This is the first incident of Kannada activists confronting Maharashtra over the border dispute reported in Karnataka.

Responding to the Maratha organisation’s protest, Bommai said: “If somebody is doing it, I condemn it and I urge the Maharashtra government to take immediate action and stop this.

“It will bring a great divide among the states. So, the Maharashtra government should act swiftly. We are law-abiding people and we are within our rights.”

“We are confident. We will safeguard our boundaries, our people and everybody,” Bommai said, and reiterated that the state government was fully committed to protect the border areas of Karnataka.

“Karnataka-Maharashtra border dispute case in Supreme Court, slated for 23 November, was adjourned due to absence of a justice in the three-member Constitution Bench. Maharashtra is likely to move a fresh application in the coming week for a hearing,” said advocate MN Zirali, a member of Karnataka’s legal team headed by former Attorney General of India Mukul Rohatgi.

“The chairman’s post was vacant for the past six months due to the demise of former Karnataka high court judge KL Manjunath. I will welcome the appointment of former Supreme Court judge Shivaraj V Patil as chairman. He is a staunch Kannadiga,” said Ashok Chandaragi.

“However, the state government must move the Border Protection Commission office to Suvarna Soudha Belagavi,” he added.