If the elections were held today, YSRCP would win six seats and the TDP would emerge victorious in only one. 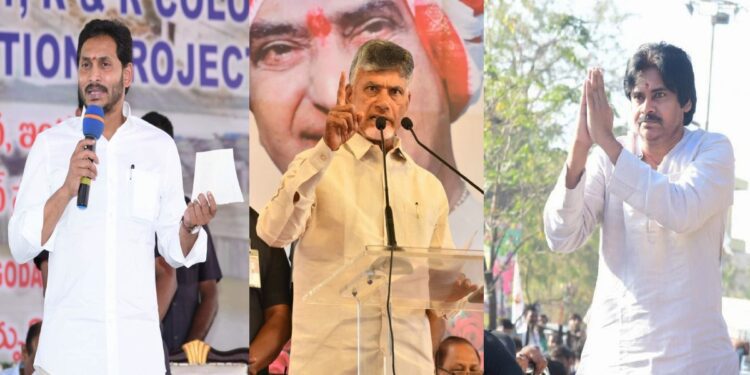 What would the results be like if elections were held today in the seven constituencies reserved for Scheduled Tribes (STs) in Andhra Pradesh?

The 1st Tracker Poll by People’s Pulse for the state ahead of next year’s elections has shown that YSRCP would win six out of seven seats effortlessly.

People’s Pulse, a Hyderabad-based political research organisation, in its 1st Tracker Poll — done between 16 and 21 January — found that the ruling YSRCP continues to hold sway in all but one of the seven Assembly seats reserved for the STs in Andhra Pradesh.

STs are among the strongest vote banks of Chief Minister YS Jagan Mohan Reddy’s YSRCP, along with minorities.

If the elections were to be held today, the YSRCP would win six seats and the TDP would emerge victorious in only one segment, the poll suggests.

Percentage-wise, the YSRCP would get 44.25 percent of votes while the TDP would finish second with a 39.39 vote share. Actor-turned- politician Pawan Kalyan’s Jana Sena would get 8.19 percent of the votes. (Margin of error would be plus or minus 3 percent.) 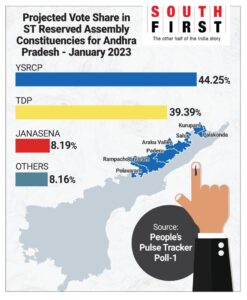 This means that the YSRCP is ahead of the TDP by 4.86 percent of votes.

The seats where YSRC is comfortable are Rampachodavaram, Paderu, Araku, Salur, Palakonda, and Kurupam. The TDP would have to be content with Polavaram.

In the People’s Pulse 1st Tracker Poll, the YSRCP had a lead over its nearest rival TDP by six to eight percent vote share in Ramachodavaram, Paderu Araku, and Salur. In Palakonda, the difference in vote share between the YSRCP and TDP is just 1.31 percent.

The YSRCP has remained very strong in tribal constituencies after the division of the state. Though the TDP came to power in 2014 against the backdrop of the bifurcation of the state, it could win only one of the ST seats — Polavaram. The remaining six tribal seats went to the YSRC. 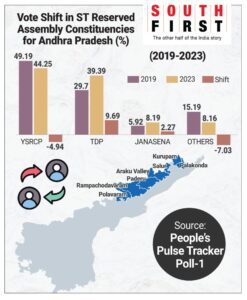 In the 2019 Assembly elections, the YSRCP had won all seven seats.

Earlier, in 2009, when elections were held in the integrated state, the TDP won only Araku, while the Congress bagged the remaining six seats.

The figures point to the fact that historically the TDP has been a weak player in the tribal constituencies.

According to the CSDS Lokniti study of the 2019 elections, 86 percent of the tribals supported YSRCP while only 14 percent voted in favour of the TDP.

The People’s Pulse poll has found that the SC and ST communities are largely supporting the YSRCP while significant sections of the BCs and forward communities are with the TDP or the Jana Sena.

Among the forward  communities, 16 percent are with Jana Sena while YSRCP draws its support from the 36-60 years age group and the TDP is strong in the 18-35 age group. About 14 percent of youth between the age group of 18-35 is with Jana Sena.

The poll found that the people in the seven segments are unhappy over the poor performance of the Integrated Tribal Development Agency (ITDA). They are worried about the prospects of mining in their areas and are unhappy with their MLAs 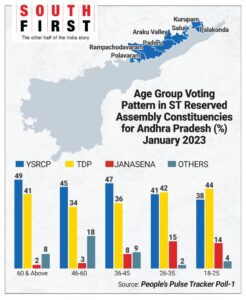 In these seven segments, teachers, government employees, and non-government organisations wield influence over the people. The tribals feel that the mainstream political parties have not done enough for them. They still pine for the days when the Communist parties had rendered some service to them.

The CPI(M) has some presence in Polavaram, Rampachodavaram, Araku, and Palakonda, while the CPI is present in the Paderu segment. National parties like the BJP and the Congress are non-existent.

While the TDP and Jana Sena leaders have been meeting to explore the possibility of a pre-poll alliance, no official statement about the same has come yet.

Given the results of the first tracker poll, in the case of an alliance between TDP and Jana Sena, things may get tougher for YSRCP even in ST dominant seats.

People’s Pulse conducted the first tracker poll for Andhra Pradesh from 16 to 21 January.

Five polling stations were selected from each Assembly segment using the method of systematic random sampling.

In each polling station, 20-25 percent of samples were selected randomly from the electoral rolls.

A total of 700 samples were taken so that they reflect the ground-level picture. Gender was given equal representation. The Survey was done with face-to-face interviews

People’s Pulse researchers conducted group discussions on various topics to gauge people’s mood and how they were disposed to different political parties.